A 27,000km voyage of conservation has helped safeguard some of the world’s most imperiled seabirds 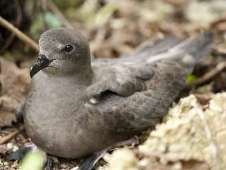 In 2011, an international team of conservationists completed a 27,000 km voyage around the Pacific restoring remote island ecosystems devastated by introduced rodents. This ground-breaking project, involving the RSPB (BirdLife in the UK), has seen rat eradication operations at three locations, including Henderson Island, one of the most remote places on the planet. The continued presence of rats post eradication highlights the need for on-going monitoring and action on the islands.

Situated over 5,000 km west of continental South America, Henderson Island (Pitcairn Group, UK Overseas Territory) in the southern Pacific is one of the world’s most remote islands. An uninhabited limestone atoll, covering an area of just 43 km2, is of such great biologically importance that it has been designated a World Heritage Site by the United Nations. It is home to more than 55 species found nowhere else on earth. These include four unique land-birds—Henderson Fruit-dove Ptilinopus insularis, Henderson Lorikeet Vini stepheni, Henderson Crake Porzana atra and Henderson Reed-warbler Acrocephalus taiti—all of which are designated ‘Vulnerable’ to extinction on the IUCN Red List.

The island is also home to huge numbers of seabirds, including substantial populations of several surface-nesting gadfly petrel species, most notably the endemic and ‘Endangered’ Henderson Petrel Pterodroma atrata. Unfortunately, the island’s unique natural heritage was under threat from introduced Pacific rat Rattus exulans. The seabird colony—once thought to number millions of pairs—had been reduced to just 40,000 pairs. Field studies revealed that 95% of petrel chicks were being killed within just one week of hatching (amounting to over 25,000 chicks every year). Since petrels lay only one egg in a clutch, this level of predation was unsustainable and conservationists feared for the long-term survival of Henderson Petrel.

In response, the RSPB (BirdLife in the UK) launched an ambitious project to eradicate rats from the island. Following a feasibility study in 2008 and a research expedition in 2009, it was decided that the project was technically viable and the eradication operation was scheduled for the summer of 2011.

The greatest challenge facing the project was the difficulty and expense of getting the team and their equipment to such a remote location. The RSPB therefore formed a unique international partnership with two other island restoration projects in order to share equipment and expertise. In May 2011, a single vessel, the MV Aquila, equipped with two helicopters, set off from Seattle, USA en route to Palmyra Atoll (USA), a 12 km2 island roughly halfway between Hawaii and American Samoa. The rat eradication carried out here—led by Island Conservation in partnership with the US Fish & Wildlife Service and The Nature Conservancy—will help safeguard a million nesting seabirds, including the second largest colony of Red-footed Booby Sula sula in the world. The next destination for the MV Aquila was the Phoenix Islands Protected Area in Kiribati. Working with the Phoenix Island Protected Area Management Committee and Eco-Oceania Pty Ltd, rats were successfully eradicated from the seabird-rich islands of Enderbury and Birnie. The team arrived at Henderson Island in early August, having picked up a further 76 tonnes of rodenticide in Samoa.

The two helicopters flew sorties across Henderson scattering pellets laced with rodenticide from buckets slung beneath. The project was the first time such an operation has been conducted from the deck of a ship. The highly skilled pilots were able to systematically cover the island in just three days. A second, two-day operation took place a week later to ensure that all rats had been exposed to the bait.

Henderson crake had been identified as being at risk of possible non-target poisoning. Therefore, in order to safeguard the species, a team including staff from the University of Cambridge, the Royal Zoological Society of Scotland (RZSS) and Pitcairn, arrived a month before the MV Aquila in order to establish a captive population. Whilst in captivity the crake even bred, allowing six extra chicks to be released at the end of the operation. Although some mortality was observed in the wild population, the crakes have since bred well, and it is anticipated that the population will now increase beyond its pre-operational level in the absence of rat predation and competition.

Unfortunately, a nine week monitoring expedition in 2012 confirmed that rats were still present in the eradication areas. Whilst the rats were not yet back to pre-eradication levels—enabling brief improvements in bird fledgling success—rat populations are likely to rapidly increase. To ensure the future success of the project, an expedition is planned for 2015 to conduct research into the ecology of the rat ecology to better understand how they can be effectively eradicated.

Recommended Citation:
BirdLife International (2015) A 27,000km voyage of conservation has helped safeguard some of the world’s most imperiled seabirds. Downloaded from http://www.birdlife.org on 03/08/2021