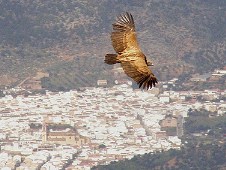 Post construction monitoring was used to inform the mitigation approach of ‘shutdown on demand’ to reduce the mortality rates in Griffon Vulture populations at a wind farm in Tarifa, Spain. The action has had a positive effect, reducing mortality by half, with only a minimal impact on overall energy generation.

A study which took place between 2006 and 2009 in Tarifa, Spain (de Lucas et al. 2012), showed that the mitigation action of ‘shutdown on demand’ can reduce Griffon Vulture Gyps fulvus mortality through collisions with wind turbines. ‘Shutdown on demand’ is a practice whereby selected turbines have their rotation halted at specific set times, e.g. migratory periods or other periods of high activity.

The study area contained a breeding population of about 300 pairs of vultures and is surrounded by other breeding colonies. Each year, between October and November, migrating vultures from northern Spain and across Europe congregated in the area before crossing the Strait of Gibraltar into Africa. A maximum number of 1,800 birds can be present daily during periods of peak migration.

Extensive wind farms in the area are a considerable risk to vultures through direct collision with turbine blades, as well as displacement and barrier effects. A post construction monitoring process identified selective stopping of certain turbines as the most effective mitigation measure. During the survey period, Griffon Vulture carcasses were found to be unevenly distributed across the study area. This information was used to inform the selective shut down of certain high impact turbines when vultures where observed in their vicinity.

On-going surveillance is used to identify shut down operations. If a vulture flies in a trajectory which will potentially result in a collision with turbine blades, or when a group of vultures fly within, or near to, a wind farm, the individual carrying out the surveillance contacts the wind farm control office to switch off the specific turbines involved in the risk, stopping the rotation within a maximum time frame of three minutes. Through the selective stopping of certain high risk turbines, Griffon Vulture mortality rate was reduced by 50%.

The reduction in vulture deaths was achieved with a drop in energy production of only 0.7%. Between 2008 and 2009, a total of 4,408 turbine stops where recorded, with an average of 18 stops per turbine. On average, turbines were stopped for 6h 20min each year, with the mediate duration of a stop being just over 22 minutes.

This study shows that the ‘shutdown on demand’ of a small number of high impact turbines can have a positive impact in reducing collision rates with bird populations, with little effect on overall energy production.