Rewilding may offer a sustainable alternative to traditional management 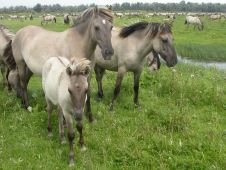 In many parts of the world, including much of Northwest Europe, conservation is focussed on the preservation of social-production landscapes created and maintained through traditional land management practices. In contrast, ‘rewilding’ strategies, as pioneered in the Netherlands, advocate for the restoration of ecosystems maintained exclusively through natural processes, in essence the creation of ‘new wilderness’.

Over the Millennia, humankind has radically reshaped the Earth’s surface—modifying, manipulating and managing nature in order to satisfy its needs for food, water and shelter. The most profound change began ca. 7,000–10,000 years ago when Neolithic societies first began to domesticate plants and animals, and moved from being hunter-gatherers to settled agriculturalists. The transformation of the biosphere through agriculture is now so comprehensive that in many parts of the world people view farmland and countryside as synonymous. In the UK, for example, many landscapes that are widely considered to be entirely ‘natural’ are in fact the unintended by-product of centuries of low intensity agricultural land use. Contrary to popular belief, few of the UK’s national parks preserve wilderness, but are instead ‘cultural’ landscapes created and sustained by rural activity. Many habitats of high conservation value, such as coppiced woodlands, calcareous grasslands and lowland heaths, require continual intervention through traditional agricultural techniques such as hay cutting, livestock grazing and burning. These are ‘plagioclimax’ communities, in which the farming practices act to prevent the vegetation from developing towards a mature, stable state; effectively making permanent a naturally ephemeral habitat stage. This disturbance typically enhances biological diversity, both locally by providing an environment in which early and late successional species can coexist and regionally by producing a more varied landscape in which a range of different vegetative stages are represented.

However, many traditional rural practises have ceased to be economically viable and replicating them ad infinitum for the purpose of conservation may be unsustainable—effectively committing conservationists to a ceaseless battle against ecological succession that is both expensive and labour intensive. Increasingly, the conservation of anthropogenic landscapes through continuous intervention is being questioned (see, e.g., Whitbread and Jenman 1995). Proponents of ‘rewilding’ advocate a more process-orientated approach, one which allows natural ecological processes, and not traditional management prescriptions, to shape biological communities (Donlan et al. 2006, Whitbread and Jenman 1995). They argue that perpetuating the landscape that existed prior to the advent of intensive agricultural practises (in essence, the landscape immediately before the Green Revolution of the mid 20th century) constitutes an arbitrary and unambitious baseline for conservation. Furthermore, they suggest that much current conservation management may well be based on ‘anecdote and myth’ rather than verifiable scientific evidence (Sutherland et al. 2004).

Rewilding involves understanding the ecological processes that shaped the landscape prior to the substantial impacts of human societies. Sub-climactic biological communities are maintained in natural systems through disturbance events such as fire, flooding and windstorms or by interspecific interactions such as grazing. The rewilding approach requires that absent or defunct components of an ecosystem are identified and then successfully reinstated or replicated. Higher trophic level species, such as large predators and herbivores, often perform a key role in shaping natural ecosystems (Terborgh et al. 2001, Vera 2000). Consequently, the rewilding ethos encourages the reintroduction of extirpated mega-fauna or suitable proxies (Zimov 2005, Donlan et al. 2006).

One country that has embraced rewilding is the Netherlands, where the philosophy features prominently in national nature policy. For example, at the Oostvaardersplassen, a large wetland ecosystem less than 40km northeast of Amsterdam, the development of the vegetation is driven by free-roaming herds of ‘wild’ herbivores. Red deer have been introduced, along with Heck cattle and Konik ponies—seen as good surrogates for the now extinct auroch and tarpan. Today an estimated 3,500 herbivores are present on the reserve (Wigbels 2001). Unlike conventional conservation grazing systems in which herbivores are used as tools to achieve precise habitat targets, at the Oostvaardersplassen a policy of minimal intervention is practiced. The animals live on the reserve year-round and are free to breed and establish natural herd demography, social structures and behaviours. The number of herbivores present is determined by the available space and food supply and is consequently prone to fluctuations. Over the winter months, the cattle and horses stop feeding, live off fat reserves acquired during the previous summer and by the end of winter, a proportion succumb to starvation. These ‘boom-and-bust’ population cycles result in grazing intensity that varies from one year to the next, creating a dynamic vegetation community with windows of opportunity in which tree and scrub regeneration can occur. The presence of such large mammal herds has had unforeseen ecological consequences. The appearance of animal carcasses on the reserve has proved a benefit to necrophalic birds of prey*. White-tailed Eagle Haliaeetus albicilla have become a regular winter visitor to the area and even a Cinereous Vulture Aegypius monachus frequented the reserve in 2005. Most spectacularly, in 2006, a pair of White-tailed Eagles successfully bred on the reserve, constituting the first breeding of this species in the Netherlands since the Middle Ages.

*Dutch law requires the removal and destruction of all ungulate carcasses to avoid the spread of infectious diseases. Although the Dutch parliament had initially granted the Oostvaardersplassen an exemption from this law, this was recently revoked and the reserve managers are currently obliged to remove all large herbivore remains.