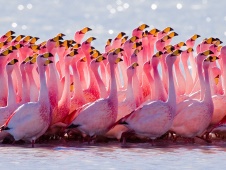 Passive restoration activities were implemented within the Laguna Grande sector of the High Andean Ramsar site “Lagunas Altoandinas y Puneñas de Catamarca”. Activities consisted of re-routing the track between El Peñón and Volcán Galán, and the installation of informative and educational signage. The initiative, designed and coordinated jointly by the High Andean Flamingo Conservation Group, the conservation NGO, Fundación Yuchan and the Catamarca environmental authorities, was aimed at reducing impacts at fragile sites by concentrating visitors at three points and by providing adequate information on best practices while visiting the wetlands. 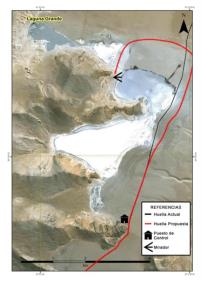 The track from El Peñón to Volcán Galán runs along the eastern shore of Laguna Grande, and has now been re-routed over the middle section to a distance of 200 m from the lake shore. Signs have been placed at three points: 1) at the site of the future control post, 2) in the re-routed section of the track, and 3) at the viewpoint of Peñas de Gaudí.

Read this case study in Spanish

Laguna Grande is one of 20 wetlands making up the Ramsar site of “Lagunas Altoandinas y Puneñas de Catamarca”. The saline wetland, located at 4300 m above sea level, hosts up to 19,000 Puna Flamingos Phoenicoparrus jamesi each summer, representing almost 18% of its global population and also acts as a regular nesting site for the species. Other species present include Andean Flamingo Phoenicoparrus andinus, Chilean Flamingo Phoenicopterus chilensis, and Neotropical migratory shorebirds, such as Baird’s Sandpiper Calidris bairdii and Wilson’s Phalarope Steganopus tricolor.

Due to its spectacular landscape, Laguna Grande is a tourist destination for 4x4 vehicles; however, the activity lacks regulation and has directly affected waterbirds, especially the nesting of Puna Flamingos and Puna Plover Charadrius alticola. This pressure is further exacerbated by off-roading competitions and rallies, in particular, the last six editions of the Dakar Rally in South America, which have crossed the Puna ecosystem of Catamarca.

Priority activities to facilitate the passive restoration of the Laguna Grande sector were focused on:

Recommended Citation:
BirdLife International (2013) Restoration activities at Laguna Grande IBA in Argentina are helping to reduce the impact of tourism. Downloaded from http://www.birdlife.org on 10/12/2022