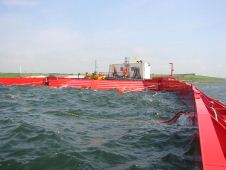 Oceanic wave and tidal resources are a potentially inexhaustible source of clean, low carbon, renewable energy. Although there are very few operational sites thus far, the coming decades could see a rapid expansion of large-scale, commercial developments. Little is known about what effect these sites could have on seabirds and other marine wildlife, and it is important that efforts are made to identify and mitigate any potential negative impacts.

A desire to reduce anthropogenic carbon emissions has led to an expansion in renewable energy technologies—including those that harness wind, wave and tidal resources at sea. Wind power is by far the most advanced sector of the marine renewable industry, with numerous offshore wind farms now in full operation. The proliferation of large assemblages of offshore turbines has raised concerns over the potential impact that they may have on the marine environment—particularly, the risk they pose to seabirds and other marine wildlife through collisions, loss of habitat and barriers to movement (Desholm and Kahlert 2005, Fox et al. 2006, Everaert and Stienen 2007). Despite lagging behind wind technology, there is now growing interest in the potential to harness energy from oceanic waves and tides. However, because these technologies are in their infancy, little research has yet been conducted into the impact these devices could have on marine wildlife.

Tides—the rise and fall of sea levels caused by the gravitational forces of the Moon and Sun on the Earth's rotation—are a potentially inexhaustible source of energy, and several tidal power devices have been developed (see www.emec.org.uk/marine-energy/tidal-devices/). Although less consistent, waves—resulting from wind blowing across the surface of the sea—are another potentially enormous source of renewable energy, and again several devises are currently in development (see www.emec.org.uk/marine-energy/wave-devices/).

One of the principle threats posed to birds by wind turbines (both on land and offshore) is the risk of in-flight collision (Hüppop et al. 2006). Tidal Stream and Wave (TSW) powered devices have a much smaller above water component—indeed many are entirely submerged—and therefore pose a much lower aerial collision risk. However, many TSW devices have extensive submerged components, often involving complex moving parts and internal chambers, and may present a risk of collision, entanglement or entrapment to diving seabirds (Grecian et al. 2010, Langton et al. 2011, Witt et al. 2012). Rotating underwater turbine blades could prove particularly injurious if they cause increased water turbidity and reduced visibility (Grecian et al. 2010).

The installation and subsequent operation of TSW devices may result in the displacement of marine birds from important feeding grounds either through direct disturbance to the birds themselves or through disruption to their prey. Studies suggest that underwater noise, vibrations and even electromagnetic fields emanating from man-made devices can disorientate or distress a range of marine taxa, including fish and benthic invertebrates (Madsen et al. 2006, Slabbekoorn et al. 2010, Witt et al. 2012).The avoidance of TSW devices by fish would have obvious knock-on effects for many seabird species.

Artificial structures can, however, enhance marine ecosystems and seabirds could benefit from carefully considered TSW developments that provide roosting sites or act as artificial reefs around which marine communities can develop (Grecian et al. 2010, Langhamer et al. 2010). In addition, commercial fishing is unlikely to be permitted within the vicinity of TSW devices and these areas may therefore become de facto ‘no-take zones’ in which fish, and consequently piscivorous bird species, thrive (Inger et al. 2009).

Large-scale, commercial TSW operations have yet to commence in earnest. The impact that they will have on marine biodiversity it not yet known, but will probably depend on the precise design, size and configuration of the devices. They certainly have the potential to negatively affect seabirds, either directly, through mortality from collisions, or indirectly, by altering habitat quality and prey abundance. However, given careful design, these deleterious impacts could be mitigated and TSW operations might even offer substantial benefits by providing artificial reefs or de facto marine Protected Areas.

Recommended Citation:
BirdLife International (2012) More research is needed into the impact of wave and tidal energy devices on seabirds. Downloaded from http://www.birdlife.org on 27/09/2022