Loss of intertidal habitat through land-claim in Asia

Asia’s intertidal habitats are rapidly shrinking due to intensive land reclamation across vast coastal areas. Massive economic and population growth throughout Asia is driving this demand for coastal land-claim projects, and has resulted in the deterioration and removal of important intertidal ecosystems. Consequently, this abrupt loss of coastal habitat is having a dramatic impact on wildlife, particularly waterbirds, many of which are now threatened with extinction. 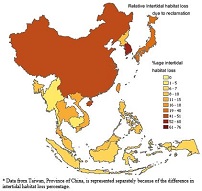 For data and references see Appendix 6 of Mackinnon et al. 2012.

Asia’s waterbirds have declined dramatically over the past 60 years, with currently 64% of these species experiencing decreasing population trends. A variety of pressures are to blame for these declines, however, loss of intertidal habitat through land reclamation is by far the most severe and irreversible threat to Asian coastal ecosystems (MacKinnon et al. 2012; Melville et al. 2016).

A region which has been subject to intensive land reclamation is the Yellow Sea (including the Bohai Sea). It holds several important coastal sites which provide important stop off areas for migratory shorebirds using the East Asian-Australasian Flyway (EAAF) (Melville et al. 2016). However, since the 1980s these key sites have experienced mean losses of 35% intertidal habitat area. For example, the tidal flats of Saemangeum (South Korea) have suffered mass intertidal destruction due to the largest reclamation project to date (Birds Korea 2010). This 40,100 ha development project has resulted in the loss of 28,000 ha of intertidal habitat (see photo), and has contributed to the decline of many migratory waterbirds including the Endangered Great Knot (Calidris tenuirostris) and Endangered Far Eastern Curlew (Numenius madagascariensis) (MacKinnon et al. 2012). China’s coastal wetlands, which border the Yellow Sea and Bohai Sea, have also been drastically reduced through the construction of thousands of kilometers of sea walls. This construction extends over 60% of China’s mainland coastline and is aptly named the new ‘Great Wall’ as its length exceeds the Great Wall of China (Ma et al. 2014). In addition the depletion of wetland biodiversity, vital intertidal ecosystem services have deteriorated resulting in compromised sea cleaning and pollutant removal systems, loss of coastal protection from extreme weather events and increasingly rapid sea level rise (MacKinnon et al. 2012).

Birds Korea (2010) The Birds Korea Blueprint 2010 for the conservation of the avian biodiversity of the South Korean part of the Yellow Sea. Birds Korea, Seoul. Available at: http://www.birdskorea.org.

Recommended Citation:
BirdLife International (2017) Loss of intertidal habitat through land-claim in Asia. Downloaded from http://www.birdlife.org on 05/07/2022