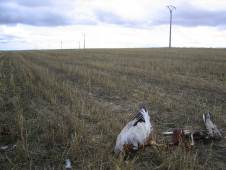 A study conducted in the Crimean steppes, Ukraine, shows that powerlines are hazardous to birds during migrations and in winter. Greater collision risk is associated with lines cutting across landscape features and in areas where birds congregate in high numbers.

Within the Ukrainian steppes, there is a dense grid of overhead powerlines. Surveys were carried out at several sites in the Crimea, with detailed counts of birds undertaken along powerlines crossing the Kerch Peninsula in 2001–2002 and 2005–2006, and in the Tarkhankut upland in 2006–2007 (Andriushchenko and Popenko 2012).

Searches for carcasses resulted in the observation of 57 mortality events, with a total of seven different species identified as being impacted through collision or electrocution. The studies showed that powerlines are hazardous to birds during migrations and in winter, especially in the areas where large congregations of birds occur. The study revealed that large-bodied birds, such as swans, cranes and bustard have a higher collision risk, probably because they are unable to manoeuvre quickly in flight.

Poor visibility (at night or in heavy rain, snowfall and fog) is the main reason for increasing numbers of bird collision. However, powerlines provide some benefits to birds and may have a positive impact on some rare species, with many birds utilising electric poles and wires as nesting and roosting sites as well as hunting perches, especially in open landscapes.

The studies revealed that the most dangerous powerlines are:

Appropriate routeing of powerlines, informed by ornithological assessment, could reduce the risk of collision, as would adherence to few simple rules. For example, powerlines should run parallel to natural features rather than cut across them and avoid habitats important for birds. Where birds are using poles, it is important that these are safe perching areas and that they do not hold an electrocution risk.

Recommended Citation:
BirdLife International (2013) In the Ukrainian steppes powerlines are hazardous to birds during migrations and in winter. Downloaded from http://www.birdlife.org on 22/01/2022