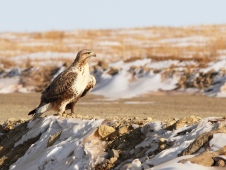 With funding from the World Bank, BirdLife Asia and the Wildlife Science and Conservation Center undertook a strategic overview of the potential impacts of key economic sectors on important areas of natural habitat in Mongolia. Important Bird Areas were used as a tool to extend the study beyond formal protected areas.

There are a total of 70 Important Bird and Biodiversity Areas (IBAs) in Mongolia, covering over eight million hectares (ha). These IBAs contain large areas of relatively unspoilt natural habitats, including boreal forest (taiga), steppe grassland, semi-desert and desert, as well as many wetlands of international importance. Given the scale of threats faced by Mongolia's IBAs as the country experiences rapid economic growth, and considering the fact that 30% of the IBA network lies outside of national protected areas, there is a need for a programme of coordinated conservation action by the government, civil society, donors and the corporate sector.

In response to this need, BirdLife Asia and the Wildlife Science and Conservation Center, Mongolia, secured funding from the World Bank, through the Japanese Consultant Trust Funds, to undertake a strategic overview of the potential impacts of developments in three key economic sectors (mining, infrastructure and tourism) on important areas of natural habitat, including IBAs. The justification for including IBAs in this study was provided by the World Bank's environmental and social safeguard policies, which include a commitment (under Operational Policy 4.04 on Natural Habitats) not to support projects that, in the Bank's opinion, involve the significant conversion or degradation of critical natural habitats. IBAs qualify as critical natural habitats as defined by the World Bank, because they "are critical for rare, vulnerable, migratory, or endangered species".

With regard to mining, the study found that, as of May 2008, exploration licences covered nearly 4 million ha of critical natural habitat. While only 1% of the national protected area system overlaps with exploration licences, 9% of the IBA network does. This reflects the fact that IBAs are not safeguarded from mineral exploration under Mongolian law, except where they are otherwise designated as protected areas.

Regarding infrastructure, the study found that, although only around 160,000 ha of critical natural habitats is located within mining licences, a further 6.5 million ha lies within 20 km of one or more mining licence, including 900,000 ha within IBAs. These areas are considered to be at high risk of being impacted by infrastructure, because development of mineral deposits in remote areas will require the construction of water, power and transport infrastructure to facilitate their extraction, processing and export to markets (particularly China).

The study also found that tourism is placing increasing pressure on critical natural habitats, with the number of tourist camps in Mongolia increasing from 63 in 1999 to 200 in 2006. Of the 140 tourist camps mapped by the study, 98 are located within or adjacent to critical natural habitats, including 65 in or near IBAs. At present, the threat to IBAs posed by tourism development is considered to be of less of a concern that that posed by mining and infrastructure development.

Recommended Citation:
BirdLife International (2008) Important Bird Areas are being used to integrate biodiversity and development planning in Mongolia. Downloaded from http://www.birdlife.org on 23/01/2022