Human disturbance at seabird colonies has a range of impacts 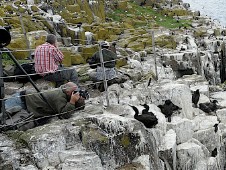 Human disturbance of seabird colonies is widespread and increasing, particularly in the polar regions. The impacts are species-specific, with some species considerably more sensitive to human intrusion than others; thus the measures required to mitigate these impacts must be based on case-specific information.

Colonial seabirds are subject to disturbance whilst on land from a range of human activities. Human intrusion into seabird colonies is increasingly common as recreational, scientific and development demands increase. These activities can have direct effects on the nesting success and survival of individual breeders, as well as long-term consequences for the persistence of colonies as a whole.

Public interest in viewing wildlife has increased, and many protected areas encompassing seabird colonies are managed for both conservation and recreation. Despite deriving conservation benefits through revenue generation and public engagement, activities such as boat-based ecotourism, helicopter and plane tours and colony visits can detrimentally affect seabird behaviour. Human presence can flush ground-nesting seabirds, particularly the Pelecaniformes, Larids and Charadriformes, which in turn can injure nestlings and eggs, leave the nest vulnerable to depredation by gulls and corvids, or exposed to the elements (e.g. cooling of an incubated clutch or nestling leading to weakness or death). This can also result in nest abandonment or, in the case of prospecting pairs, means they do not settle in the first place (Carney and Sydeman 1999). Low-flying aircraft used in ecotourism ventures and for accessing field research stations have been shown to provoke stress and flight responses in a number of species, sometimes orders of magnitude more severe than those invoked by direct human presence (Wilson et al. 1991).

Even when there is no flush response (such as with penguins, which often appear indifferent to human disturbance), the more subtle behavioural and physiological responses to intrusions range from increases in alarm calling, more rapid heart rates and circulating stress hormones (Ellenberg et al. 2006), to substantial increases in body temperature by as much as two degrees (Regel and Pütz 1997). Importantly, these physiological stress responses have been shown to be associated with reduced fitness (i.e. reduced survival or breeding success), for example in Yellow-Eyed Penguins Megadyptes antipodes (McClung et al. 2004), although in general more studies of this kind are needed.

For burrow-nesters such as shearwaters, puffins and auklets, visitation has a limited effect on the breeding adults, as they tend to be away foraging at sea during the day. However, handling incubating birds still results in a degree of nest abandonment (Carey 2011) and, for older chicks within the burrows, human presence can cause stress, potentially leading to impaired immune system development (Brewer et al. 2008), or reduced body mass at fledging (Albores-Barajas et al. 2009). Since fledgling body mass and size are linked to sub-adult survival (Morrison et al. 2009, McClung et al. 2004), these effects on chicks in the nest may have long-term repercussions for the stability of the population.

Field research stations and regular monitoring of ground- and burrow-nesting seabirds by scientists has a similar effect to tourist visitation, although handling of chicks and adults is almost certainly even more stressful than human presence alone. For this reason a great deal of studies have experimentally tested for critical levels of seabird handling and investigated ways to safeguard colonies that still require monitoring (see Carney and Sydeman 1999 and Gill et al. 2001 for a synthesis; and Carey 2009 for a synthesis for Procellariiforms). These have resulted in the development of protocols that prescribe the time of day, duration, and amount of handling permitted, in order to minimize impact on the study species. In general, the available evidence shows that, when appropriate safeguards are in place, the effect on the study species is considerably reduced.

Species differ drastically in their sensitivity to human disturbance. Critical reaction distances and their associated behavioural responses vary by species and perceived threat, so conservation measures such as buffer zones and seasonal restrictions must be tailored to the species and human activity in question (Martínez-Abraín et al. 2008, Beale and Monaghan 2004). For example, Magnificent Fregata magnificens and Greater Frigatebirds F. minor on the Galapagos were shown to be unaffected by human presence (Tindle 1979), whereas even just the alarm calls of gulls in response to human intrusion was enough to flush Brown Pelicans Pelecanus occidentalis, which then abandoned whole areas for the remainder of the breeding season (Anderson and Keith 1980). Furthermore, some species show signs of habituation to human presence or a gradual decline in their flushing and stress responses with regular disturbance (e.g., Laysan albatross; Burger and Gochfeld 1999). However, this is by no means universal and, for other species, the presence of people at, or near to, their breeding and roosting areas fundamentally alters their behaviour and potentially also their vital demographic rates.

For species nesting as infrequently as once every two years, the widespread failure of breeding attempts as a result of disturbance will have a large impact on productivity. For threatened seabirds this is a serious conservation problem, particularly where conservation areas are also managed for recreation.

Recommended Citation:
BirdLife International (2012) Human disturbance at seabird colonies has a range of impacts. Downloaded from http://www.birdlife.org on 28/06/2022