Habitat restoration has led to the recovery of the Azores Bullfinch 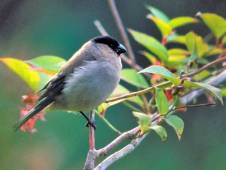 The Azores Bullfinch Pyrrhula murina—Europe’s most threatened passerine—has experienced an impressive reversal of fortune thanks to the dedicated actions of the Portuguese Society for the Study of Birds (SPEA, BirdLife in Portugal). As a result of habitat restoration and improved site protection and management—mostly funded by the EU LIFE fund and the Azores regional government—the population has started to recover and the species has been downlisted from Critically Endangered to Endangered on the IUCN Red List—a clear example of a successful conservation intervention.

Prior to its 15th century discovery and subsequent settlement, São Miguel Island in the Azores would have been covered in dense laurissilva cloud forest (‘laurel forest’). Today, after nearly six centuries of human habitation, most of the native vegetation is gone. Cultivated fields, pastureland and plantations of Japanese red cedar Cryptomeria japonica now dominate the landscape. The last substantial remnant of native forest is found at the mountainous eastern end of the island. This area is recognised as a Special Protection Area: the Pico da Vara / Ribeira do Guilherme SPA. The few remnant patches of native laurel forest surviving there exhibit a high level of endemism, with eight of the eleven tree species found only on the Azores (Ramos 1995). Unfortunately, what remains of the native vegetation has been recently overrun by exotic plants, such as Australian cheesewood Pittosporum undulatum, yellow ginger-lily Hedychium gardnerianum, Chilean rhubarb Gunnera tinctoria and the lily-of-the-valley tree Clethra arborea.

São Miguel’s native forest is also home to the Priolo, or Azores Bullfinch Pyrrhula murina, an endemic passerine quite distinct from its European counterpart (P. pyrrhula). The species appears to have been locally abundant in the nineteenth century and was slaughtered in large numbers by the island’s fruit growers who regarded it a pest of orange orchards. However, as the laurel forests disappeared so too did the Priolo. By the late 1970s, less than 40 pairs were estimated (Le Grand 1983); whilst the first formal population census made in 1989 suggested a population of around 100 pairs (Bibby et al. 1992).

The Azores Bullfinch diet comprises nearly 40 different species, and they are the only Eurasian bird known to feed on ferns (Ramos 1995). Critically, however, at certain times of the year they are entirely dependent on just a few native species. In August and September, their diet consists chiefly of Azorean blueberry Vaccinium cylindraceum and Azorean hawkbit Leontodon filii, whilst in March and April they are reliant on Azorean holly Ilex  azorica. The prevalence of the latter appears to be a significant factor limiting the species’s distribution (Ramos 1995).

In response to the plight of Europe’s rarest passerine, an EU-funded LIFE project was launched within the Pico da Vara / Ribeira do Guilherme SPA. The project ran from 2003 to 2008 and was coordinated by the Portuguese Society for the Study of Birds (SPEA, BirdLife in Portugal). The SPEA-LIFE Priolo project, adjudged one of the five best LIFE Nature projects in 2009, has achieved a series of key steps towards the conservation of Azores Bullfinch.

The LIFE Priolo project successfully restored around 230 ha of laurel forest by removing alien species and establishing over 65,000 native plants (Teodósio et al. 2009). Fruit tree orchards were created at lower altitudes to improve the winter food availability for the Azores Bullfinch and increase the interest of farmers in this alternative livelihood activity. The project had other important socioeconomic benefits: providing the equivalent of full-time employment for 25 people annually, whilst adding an estimated €335,000 to the regional GDP each year (Teodósio et al. 2009). An interactive Environmental Interpretation Centre was opened near Nordeste and educational materials produced including a website, CD-ROM, brochures and school kits.

Research has shown that the removal of exotic plants results in a cascade of positive effects throughout the laurel forest community. Two years after being cleared, experimental forest plots were found to have 110% more native seeds, whilst the abundance of herbivorous insects had increased by 85% (Heleno et al. 2010). The increase in native seed production in turn enhances resources for seed-feeding birds. In the experimental plots the density of Azores Bullfinch increased tenfold, from 0.05 birds/ha to 0.5 birds/ha (Heleno et al. 2010).

Population indices for the Azores bullfinch

Population indices, based on data from annual population census, illustrating that the population remained relatively constant prior to 2005, before increasing markedly between 2005 and 2006.

In 2008, a comprehensive population census was carried out, funded by the Disney Worldwide Conservation Foundation. Gratifyingly, the population was estimated at approximately 775 individuals—almost three times more than were thought to occur in 2005 (Ceia 2008). The species’s range was also found to be greater than previously thought, covering an area of 102 km2. In light of these extremely positive findings, the species was downlisted in 2010 from Critically Endangered to Endangered on the IUCN Red List.

The relatively mild conditions on São Miguel, combined with low levels of predation, endow the Azores bullfinch with a high rate of survival (Monticelli et al. 2010). If sufficient habitat can be restored the future of the species should be assured. More work is needed, however, to sustain the recovery. A new Species Action Plan has been developed and a ‘Laurissilva’ LIFE project, continuing the rehabilitation of the Azorean laurel forests, has begun. As part of BirdLife’s Preventing Extinction Campaign, Birdwatch magazine has become a Species Champion for the Azores Bullfinch and will provide vital funds to help support SPEA’s continuing work (Mitchell 2008). Annual census and monitoring of the species are also being funded by this campaign.

Recommended Citation:
BirdLife International (2010) Habitat restoration has led to the recovery of the Azores Bullfinch. Downloaded from http://www.birdlife.org on 04/02/2023