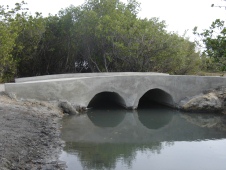 Salinas de Punta Cucharas Important Bird Area (IBA) is characterized by mangrove ecosystems, coastal sand dunes, a saline lagoon (Salinas lagoon), open water and a century-old local community. Sand extraction occurred during the 1950s that affected Salinas Lagoon´s hydrological regime and current housing and transportation developments limit the natural waterflow and freshwater intake. Concerned by evidence of mangrove and fish die-off, the local community and government worked together to improve the wetland´s waterflow. The outcome was a recovery of mangroves and the replenishment of the small-scale fisheries that provide protein and income to local fisher-folk and their families. In support of on-the-ground efforts between local community and government Sociedad Ornitológica Puertorriqueña, Inc (BirdLife’s Partner in Puerto Rico) plans to restore important shorebird nesting sites and collaborate in upcoming projects to facilitate low-impact, recreational and awareness-raising public use at the site.

The local community of Punta Cucharas—found within the IBA and to the south-east of the Salinas Lagoon—was originally a settlement of agricultural workers, but is currently a small-scale fishing community of 12 fishermen who live without electricity or running water and depend solely on the use of coastal and marine resources provided by the IBA. By contrast, the nearest town of El Tuque and other urbanized communities located north of Punta Cucharas total 33,867 people (Vasquez et al. 2011).

The IBA has been a legally-protected area (i.e. Natural Reserve) since 2008 and the Department of Natural and Environmental Resources (DRNA in Spanish) has a shared-management agreement with a leading community-based organization (Comunidad Punta Cucharas). BirdLife’s Partner in Puerto Rico, Sociedad Ornitológica Puertorriqueña, Inc. (SOPI), was a key player in the recognition of the natural area as an IBA and later advocated for its legal protection as a Natural Reserve. Since being declared a legally-protected area, SOPI has participated in discussions regarding the management of the site, and conducted bird monitoring and educational activities with the local community.

Surrounding roads as well as residential, industrial and high-impact tourism complexes pose a constant threat to Salinas de Punta Cucharas natural systems and processes. Housing, infrastructure and highway development on the northern side of the IBA limit the flow of freshwater into the wetland (Méndez-Gallardo and Salguero-Faría 2008). Furthermore, uncontrolled sand extraction activities that occurred in Salinas Punta Cucharas during the 1950s affected Salinas Lagoon´s hydrological regime and altered the natural waterflow and freshwater intake.

In 1971, the narrow channel connecting Salinas lagoon with the sea became obstructed due to increased accumulation of sediments (i.e. construction material) and natural sand build-up (Dávila and Sustache 2004). Problems continued until Punta Cucharas community members took on the initiative to repair the channel, primarily motivated by claims from fishermen who noticed the death of mangroves and fish—most likely as a result of oxygen deprivation and increased salinity in the lagoon. In collaboration with the DRNA and with support from US Fish and Wildlife Service, the Comunidad Punta Cucharas organization were able to open up the channel and repair a small bridge with the intention of improving waterflow and the exchange of nutrients, organisms and minerals in and out of the wetlands system. They also installed fences around damaged mangrove areas in order to limit human and vehicle access and allow the vegetation to recover.

The hands-on interventions of the community together with government support have resulted in improvement of the waterflow, recovery of mangroves and consequently, replenishment of the small-scale fisheries that provide protein and income to fisher-folk. Furthermore, the actions of the Punta Cucharas community members have earned them popular recognition, helped increase public attention and societal perception toward mangrove ecosystems and built the foundation for sustained collaborative action at the IBA.

This turn of events shows that a strong level of attachment and sense of ownership/localness to a given site and its natural resources—particularly in the case of key interest/user groups—enables self-mobilization of the local community. The potential loss of important ecosystem services (e.g. fish and crab for food and a natural space for leisure and recreation) triggered a self-initiated mobilization of Punta Cucharas local community led by concerned fisher-folk born and raised within the community.

This case study also shows that collaboration between government and local community with benefits to nature and people is possible when an enabling framework for collaborative action exists. This is true for Salinas de Punta Cucharas where the DRNA share management with the local community, granting the latter a level of responsibility and control over the site. Furthermore, engendering the continued support of local community is cost-effective for the DRNA. With limited financial and human resources, the government depends greatly on the ‘man’ power and local resources provided by the community for on-going maintenance and management of the area.

In support of on-the-ground efforts between local community and government in Punta Cucharas, SOPI plans to restore important Least Tern nesting sites and participate in projects dealing with the construction of low-impact, recreational infrastructure.

Recommended Citation:
BirdLife International (2013) Government and local community are working together to restore life to the mangroves of Puerto Rico. Downloaded from http://www.birdlife.org on 07/02/2023