Endemic birds on Christmas Island are being devastated by introduced ants 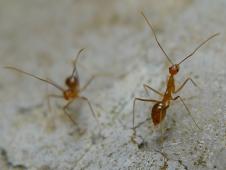 The endemic birds of Christmas Island are highly susceptible to introduced taxa, owing to their very small range and limited population size. Past habitat destruction has already resulted in population declines, which are being further exacerbated by the impacts of the introduced yellow crazy ant.

The yellow crazy ant Anoplolepis gracilipes was accidentally introduced to Christmas Island in the Indian Ocean more than 70 years ago, and has become widespread throughout (Orchard et al. 2002). The ant disrupts forest dynamics by eliminating local populations of the red crab Gecarcoidea natalis, which has a marked effect on forest composition and suitability for the native fauna (O'Dowd et al. 1999, TSSC 2005), also resulting in favourable conditions for secondary invasions (Green et al. 2001). Another potential impact of the ant is through its mutually-beneficial relationship with scale insects. Populations of scale insects can increase substantially in the ant’s presence, causing degradation of the canopy which potentially reduces the suitability of affected habitats for many bird species (O'Dowd et al. 1999, TSSC 2005).

Degradation and loss of essential breeding habitat is the biggest threat facing endemic bird species on Christmas Island. Among those affected are Christmas Island Frigatebird Fregata andrewsi, listed as Critically Endangered owing to its small and declining population, all of which breeds within just four sub-colonies (Hill and Dunn 2004) and Abbott’s Booby Papasula abbotti, listed as Endangered owing to continuing declines in habitat quality within its highly restricted breeding range (BirdLife International 2008). Yellow crazy ant has been cited as a continuing threat to the small remaining fragments of breeding habitat that these species rely on (BirdLife International 2008, Hill and Dunn 2004). Furthermore, crazy ants may also prey directly on nestlings of native birds, such as Christmas Island Hawk-owl Ninox natalis (O'Dowd et al. 1999), listed as Vulnerable owing to its very small range and susceptibility to introduced taxa (BirdLife International 2008).

A control programme for the crazy ant was initiated after 2000, effectively eliminating the ant from 95% of its former extent on the island and slowing the impact of the ant on native species. These control measures may have allowed populations of Christmas Island Imperial-pigeon Ducula whartoni and Christmas Island Hawk-owl to stabilise, and resulted in the downlisting of the Christmas Hawk-owl from Critically Endangered to Vulnerable (BirdLife International 2008). However, since that control programme was effected, the ant population has increased again and monitoring and control remain important priorities.

Recommended Citation:
BirdLife International (2008) Endemic birds on Christmas Island are being devastated by introduced ants. Downloaded from http://www.birdlife.org on 07/02/2023