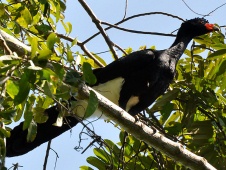 In Bolivia, the creation of a Local Conservation Group (LCG) has helped reduce hunting and other damaging activities at the last site in the country where the Endangered Wattled Curassow Crax globulosa can be found. The initiative is also helping to establish the rights of local communities to forest resources and has begun to empower indigenous people through improving dialogue with decision makers.

Bajo Rio Beni Important Bird Area (IBA) is the last site in Bolivia where the Endangered Wattled Curassow Crax globulosa can be found. While still common in the 1930s, the species has since become rare—probably as a result of hunting—and is now confined to small patches of inaccessible seasonally-flooded ‘varzea’ rainforest.

Four Tacana communities (indigenous people) live in the area, among them the community of San Marcos, comprising about 15 families. When Asociación Armonía (BirdLife in Bolivia) started working there in 2003, the community of San Marcos existed on a mainly subsistence basis, with very little regular cash income. A local school teacher taught children up to 10 years old, but older children needed to travel to town for further schooling—which they could not afford. There was no potable water programme, no sanitation system, and electricity was only provided by a generator on special occasions. Local livelihoods were entirely dependent on the forest, but those were threatened by illegal activities such as logging and hunting of economically valuable species such as Speckled Caiman Caiman yacare.

To help protect and monitor the population of Wattled Curassow, and to provide a foundation for an ecotourism programme to provide sustainable livelihoods, Asociación Armonía supported the creation of a Local Conservation Group (LCG). This LCG seeks to be truly representative of the community because its membership comprises two people from each family in the village. With donor support, a lodge has been established to provide accommodation for tourists and employment for local people, particularly women. As a result, incomes for local wildlife guides have risen significantly (from US$ 2.5-3.7 per day to US$ 5-6.5 per day), in a community which previously had little cash income for medicines or education. Concurrently, hunting and other damaging extractive activities in the IBA have declined. Between 2004 and 2008 a ban on extractive activities from the Wattled Curassow’s habitat was upheld (with only one known exception), because the community is now in a position to keep out outsiders, and because tourism revenues have provided an alternative to unsustainable resource use.

The initiative has helped to establish the rights of local communities to local forest resources, and has begun to empower them through improving dialogue with decision makers. Through the LCG, the community is increasingly involved in consultations on development policies in the area (the Mancomunidad del Río Beni and the municipality of Reyes). By working with local communities, the government and other non-governmental organisations, Asociación Armonía has helped to establish the conditions for the Bajo Rio Beni IBA to be classified as a protected area (a municipal park) and an Indigenous Territory.

This case study is taken from ‘Poverty, Biodiversity and Local Organisations: Lessons from BirdLife International’, part of the International Institute for Environment and Development’s Gatekeeper Series. To download the full paper click here.