Effective IBA monitoring is vital and Africa is leading the way 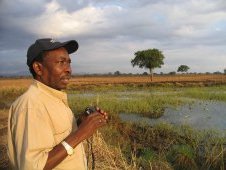 In Africa, Important Bird Area (IBA) monitoring is now well established and providing conservationists with vital information on the changing status of the region’s most significant sites for birds and biodiversity. The latest synthesis report utilises monitoring data from 147 sites in six East African and southern African countries to examine the pressures facing the region’s IBAs, their current condition and the actions being taken to conserve them.

Through its Important Bird Area (IBA) programme, BirdLife has been at the forefront of global efforts to identify those sites most critical for biodiversity. Simply identifying priority areas for conservation, however, is just the first step. Once identified, it is then essential to monitor these sites in order to ensure that they retain their importance for biodiversity, that threats to them are identified early and that conservation efforts to protect them are evaluated.

The world’s IBAs are monitored using a simple, practical and robust framework. This involves regular assessments in which the IBA is scored against indicators of pressure (the threats facing the site), state (the condition of birds and / or their habitats) and response (the action being taken to conserve the site). The data recorded by observers in the field are sent to the national BirdLife Partner organisation, where they are entered into the World Biodiversity Database—an on-line tool managed by BirdLife International—that converts this information into impact scores, based on a simple 4-point scale for pressure (0=low, 1=medium, 2=high, 3=very high), state (0=very poor, 1=poor, 2=moderate, 3=good) and response (0=negligible, 1=low, 2=medium, 3=high).

In Africa, IBA monitoring has been enthusiastically embraced by a number of BirdLife Partners. The information amassed has resulted in a number of scientific publications and national biodiversity reports that help guide policy makers and site managers. The African IBA monitoring data were regionally evaluated as part of a European Commission-funded initiative coordinated by BirdLife International and the Royal Society for Protection of Birds (RSPB; BirdLife in the UK), with four reports produced summarising the status and trends of IBAs across the region. The most recent analysis compared data from 2001, 2008, 2009 and 2010 from 147 sites in Botswana, Burundi, Kenya, Uganda, Zambia and Zimbabwe (see figure a). 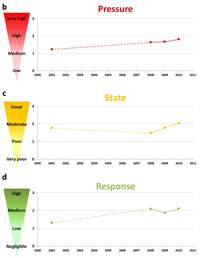 The trends revealed through IBA monitoring should be interpreted with caution because the number and subset of IBAs assessed varied between years. However, the data still provide useful insights into the condition of the region’s IBAs. The study shows that the pressures on IBAs continue to increase, with an average mean pressure score of 1.8 in 2010 compared to 1.7  in 2009 (see figure b). Pressures are not equal across the IBA network. For example, the threats facing Makgadikgadi Pans IBA in Botswana—in particular, mining activities for soda ash, diamonds and copper—have become so great that its pressure score in 2010 was 3. In contrast, the average pressure score for Kenyan IBAs decreased from 2.3 in 2009 to 2.2 in 2010.

Despite the growing pressures facing Africa’s IBAs, the state scores recorded in 2010 suggest some overall improvement in site condition, with an average score of 2.0 compared to 1.8 in 2009 (see figure c) . Given the increase in the pressure scores over this period, this might suggest that there is a time-lag before deleterious impacts are felt. Alternatively, it could be that although the pressures at African IBAs are increasing, because the conservation responses are also growing (see figure d) the overall state of IBAs is, at least for now, being maintained.

Recommended Citation:
BirdLife International (2012) Effective IBA monitoring is vital and Africa is leading the way. Downloaded from http://www.birdlife.org on 07/07/2022