Cuba’s rice paddies are an important supplementary habitat for waterbirds 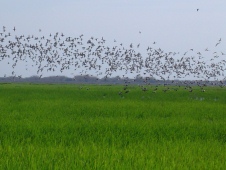 Farmed landscapes can constitute important habitats for wildlife. This is especially true for areas of low-intensity agriculture contiguous with patches of native vegetation. In Cuba, rice cultivation is typically on a small-scale. The main plantations are along the south coast, often adjacent to natural wetlands. Cuba occupies an important position on the Central Americas and Atlantic Americas Flyways, with large numbers of waterfowl and waders wintering in the country or passing through on their way to South America. It is now recognised that rice paddies are a critical supplementary habitat for these migratory birds.

Rice cultivation has been practiced in Cuba for around 200 years, and it is now the country’s second most important crop. Rice is grown across all provinces, but the main plantations are found along the south coast bordering the coastal wetlands of Pinar del Río, Matanzas, Sancti Spíritus, Camagüey and Granma.

The dissolution of the Soviet Union in 1991 led to a period of economic crisis that radically reshaped Cuban society. Agricultural production collapsed and there were initially widespread food shortages. The country was forced to become self-reliant and—without access to Soviet fossil fuels—abandon industrialised farming methods. Chemical fertilizers and pesticides, both derived from petroleum, were no longer viable. Instead, the country introduced organic systems of agriculture that relied on manual labour. Large areas of state land were lent to families and cooperatives on which to practise small-scale, subsistence rice production. By adopting these sustainable practices and concentrating on meeting the country’s internal food needs, Cuba was able to survive the crisis.

Rice cultivation follows a wet-dry cycle and, since rice is grown throughout the year, there are always fields in varying stages of flooding, creating a structurally varied landscape. The close proximity of the rice paddies to natural wetlands makes then convenient feeding grounds for waterbirds. The lack of pesticides and herbicides promotes high levels of vertebrate and invertebrate biodiversity. Consequently, waterbirds thrive. Around 70 bird species utilise the rice paddies, mostly migratory ducks and waders, but also resident species such as the West Indian Whistling-duck Dendrocygna arborea, assessed as ‘Vulnerable’ to extinction on the IUCN Red List (Mugica et al. 2006).

In the past, some rice farmers have viewed waterbirds as crop pests. However, research by the Bird Ecology Team of the University of La Havana has found that birds are an important biotic component of the rice agro-ecosystem. The majority of species feed on animals and weed seeds rather than rice seeds, whilst their droppings add nutrients to the rice paddies’ soil, promoting an energy flow between the rice paddies and the nearby wetlands. The team’s findings have helped change the attitudes of farmers and encouraged them to manage their rice paddies in favour of biodiversity.

To read a more detailed account of this case study, visit the Satoyama website, an initiative that promotes and supports socio-ecological production landscapes.