Crop expansion is a major threat to biodiversity in tropical countries 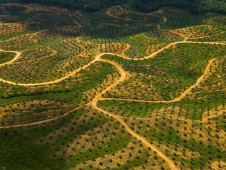 Conversion of natural habitat to cropland is one of the greatest threats facing biodiversity in the tropics. Between 1999 and 2008 cropland in tropical countries expanded by c.48,000 km2 per year. As global food demand rises, areas that were once thought to be relatively safe from conversion are now increasingly at risk. If internationally agreed biodiversity targets are to be met, it is vital that ways are found to limit cropland expansion and lessen its environmental impacts where it does occur.

Circles show absolute increment over the period 1999–2008, with scale exaggerated 10 times for ease of interpretation. Shading indicates percentage of each country occupied by annual crops in 2008. Countries not defined as tropical are shaded grey (from Phalan et al. 2013).

Agriculture has transformed the Earth’s surface. Today, nearly 40% of the planet’s ice-free land has been appropriated to grow crops and graze livestock (Foley et al. 2005). The most profound alteration to the biosphere has been the replacement of natural ecosystems—forests, savannas, grasslands and wetlands—with vast expanses of croplands. Although some species have adjusted to farmed landscapes, the loss of habitat resulting from agricultural conversion has been one of the principal drivers of global biodiversity loss and constitutes the greatest extinction risk to birds, contributing to the declines of 73% of all globally threatened species (BirdLife International 2012).

The United Nations predict that human population growth will most likely peak at around 9.5 billion before 2075 (IMechE 2010). This will result in an extra three billion people to feed by the century’s end. In addition, individual levels of consumption continue to rise, driven in part by escalating demand for meat, dairy products, biofuels and tropical commodities such as coffee (Myers and Kent 2003, Donald 2004, Wirsenius et al. 2010). Maintaining biological diversity whilst meeting growing food demand will be one of the greatest challenges of the new millennium.

Much of the growing demand for food will be met by achieving higher yields on already converted land. However, it is estimated that cropland expansion in developing countries could still impact an area the size of South Africa over the coming decades (Phalan et al. 2013). Understanding the nature of current crop expansion in the tropics is critical to understanding the threats it poses to ecosystems and appropriate conservation responses.

Phalan et al. (2013) analysed data on recent crop expansion across 128 tropical countries. They found that cropland expanded by c.48,000 km2 per year from 1999–2008 with much new cropland being added in Nigeria, Indonesia, Ethiopia, Sudan and Brazil. Rice was the crop grown over the largest area followed by maize and wheat. The crops that expanded across the largest area during the period were soybeans and maize, whilst other crops with large increases include rice, sorghum, oil palm, beans, sugar cane, cow peas, wheat and cassava.

Many of these crops are well known drivers of biodiversity loss. For example, the habitat destruction wrought by the expansion of the oil palm industry in Southeast Asia is well documented (Wilcove and Koh 2010).  However, other rapidly-expanding crops—including sorghum, cow peas and millet, which expanded over a combined area more than twice the size of that converted to oil palm—have received far less attention from the conservation community (Balmford et al. 2012). Crops such as sorghum and cassava, which were formerly regarded as the preserve of subsistence farmers, are now increasingly grown in large-scale commercial monocultures.

The study also suggests that some priority areas for conservation—such as High Biodiversity Wilderness Areas and Frontier Forests—that were in the past regarded as having ‘low vulnerability’ to agricultural conversion, may now be at risk. For instance, central Africa’s Congo Basin has traditionally been viewed as an area at low conversion risk because of its low population densities, low road density, political instability and lack of inputs to improve soil quality. However, many of these factors are now changing. Other areas with high cultivation potential include the fringes of the Amazon Basin, northern Australia, the Paraguayan Chaco, and the savanna woodlands of the Sahel and East Africa.

Finding ways to limit cropland expansion and minimise the negative environmental impacts where it does occur will be one of the greatest conservation challenges of the coming decades. It will be necessary to reduce or stabilise global consumption levels and increase yields on existing farmland. In the developed world, over-consumption and waste must be addressed.  At present, consumers in the developed world throw away between 30–50% of what they buy and globally 1.6 million tonnes of edible food is rejected by retailers because it fails to meet exacting industry standards on size and appearance (IMechE 2013). In less-developed countries, the most important issues are population growth, rising meat consumption by a burgeoning middle class and post-harvest losses (Phalan et al. 2013). For instance, in India, 21 million tonnes of wheat are wasted each year due to inadequate storage and distribution (IMechE 2013).

In October 2010, Parties to the Convention on Biological Diversity adopted the Strategic Plan for Biodiversity 2011–2020 and agreed 20 Aichi Targets . These included commitments to at least halve and, where feasible, bring close to zero, the rate of loss of all natural habitats (Target 5), to ensure all agricultural lands are managed sustainably (Target 7) and to eliminate all harmful pollution, including from excess nutrients (Target 8). Unless efforts are made to limit and ameliorate the impact of cropland expansion in the tropics, it will prove extremely difficult to meet these commitments.

Recommended Citation:
BirdLife International (2013) Crop expansion is a major threat to biodiversity in tropical countries. Downloaded from http://www.birdlife.org on 26/06/2022