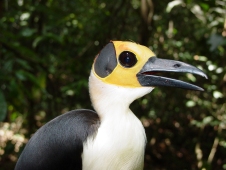 Unbroken forest once covered most of Sierra Leone, south-east Guinea, Liberia, southern Côte d’Ivoire and south-west Ghana. Today, much of the Upper Guinea Forest Ecosystem has been lost and those patches that remain are highly fragmented. Protection is often equally disjointed—artificially divided by national borders and ill-planned reserve boundaries. However, ambitious plans are underway to establish a trans-boundary protected area across the Sierra Leone-Liberia border that could provide a model for long-term conservation throughout the region.

The Sierra Leonean Gola forest (or Gola Rainforest national Park) stretches along the south-eastern border of Sierra Leone and is contiguous with the Gola forest across the Mano River in neighbouring Liberia. Part of the Upper Guinea Forest Ecosystem, this is one of the world’s most biodiversity-rich regions, home to globally threatened birds such as White-breasted Guineafowl Agelastes meleagrides and White-necked Picathartes Picathartes gymnocephalus, as well as more than 50 mammal species, including Forest Elephant Loxodonta cyclotis, Pygmy Hippo Choeropsis liberiensis and Chimpanzee Pan troglodytes.

On 15 May 2009, the Presidents of Sierra Leone and Liberia came together in Lalehun, a small Sierra Leonean village on the edge of the Gola Forest, to announce the initiative to establish a trans-boundary Peace Park between the two countries. The planned Peace Park will link the 72,000 ha Gola Rainforest National Park in Sierra Leone with the proposed 98,000 ha Gola National Forest Reserve in Liberia via cross-border forest corridors potentially covering a further 50,000 ha. Work has begun to build national capacity (both government and civil society) to manage the trans-boundary protected area and to ensure that local forest communities will benefit from future management. Carbon trading (through avoided deforestation and/or sequestration) and other sustainable revenue-generating mechanisms are being developed to finance the long term management and protection of the area.

These developments form part of the ‘Across the River’ trans-boundary Peace Park initiative, which is a four year European Union (EuropeAid fund) grant to Vogelbescherming Nederland (VBN; BirdLife in The Netherlands) aimed at securing long term conservation benefits, improved natural resources and biodiversity conservation and global carbon storage of the most critical habitats of the Upper Guinea Forest Ecosystem.

A critical grant from the Aage V. Jensen Charity Foundation is funding BirdLife's Gola forest conservation work in Liberia. BirdLife Partner the Society for Conservation of Nature in Liberia (SCNL) is conducting consultations with forest-edge communities around the proposed Gola National Park, and organising their participation in the demarcation of the park boundary. Workshops are bringing together the staff of Liberia's Forestry Development Authority (FDA) with their counterparts in Sierra Leone, to review and harmonise policies, legislation and management processes to enable them to collaborate and share resources across the border.

The staff of the Gola National Park is being given the training and equipment they need to carry out regular patrols, control illegal activities, and work with the forest communities.  SCNL's successful alternative sustainable livelihoods programme will be extended to all the communities within the park. SCNL, FDA and key leaders and representatives from forest communities and their Site Support Groups are developing a participatory biodiversity and threat monitoring programme.

The implementation of the project is coordinated by the BirdLife International Africa Partnership, along with its BirdLife Partners: the Conservation Society of Sierra Leone (CSSL; BirdLife in Sierra Leone); the Society for Conservation of Nature in Liberia (SCNL; BirdLife in Liberia) and the Royal Society for the Protection of Birds (RSPB; BirdLife in the UK); and government partners comprising the Forestry Development Authority (FDA) and the Forestry Division (FD) of the Ministry of Agriculture, Forestry and Food Security in Sierra Leone. Co-funding is provided by the Critical Ecosystem Partnership Fund (CEPF), the Sustainable & Thriving Environments for West African Regional Development (STEWARD) Program of the US Agency for International Development (USAID), the US Forest Service and Basel Zoo, the Aage V. Jensen Charity Foundation.