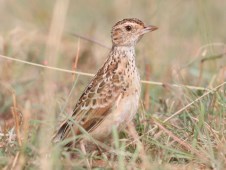 Money raised through the British Birdwatching Fair has enabled EWNHS (BirdLife in Ethiopia) to embark on restoring the Liben Lark’s habitat—identified as perhaps the most precarious of all of Africa’s birds following research by BirdLife scientists.

Liben Lark Heteromirafra sidamoensis is restricted to highly threatened grasslands on the Liben plateau, Ethiopia, and in an area near the Somaliland border to the north-east. In 2009, BirdLife uplisted Liben Lark to Critically Endangered on the IUCN Red List, with warnings that, without immediate action, it was likely to become continental Africa’s first recorded bird extinction. Money raised by the British Birdwatching Fair has supported the Ethiopian Wildlife and Natural History Society (BirdLife in Ethiopia and Species Guardian for Liben Lark) to attempt to restore the lark’s habitat. The project has been working with the agro-pastoralist community that depends on the Liben Plain for its livelihoods, in order to win their support for conservation efforts.

Twenty-five singing male larks were counted on transects in November 2012, including five in areas recently cleared of scrub that had encroached the grassland, where none had been recorded since regular counts began in 2007. The total population is now estimated to number 130–390 individuals, all confined to an area of just 30–36 km2.

Work is underway to clear encroaching scrub, establish non-grazing areas, prevent further conversion of grassland on the plain, and to build conservation capacity. A committee with broad representation has been established to manage the restoration of the Liben Plain, while multi-stakeholder workshops have led to agreement to oppose any further agricultural expansion and work with conservation organisations to preserve pastoralism.

Recommended Citation:
BirdLife International (2013) BirdLife is working with local communities to safeguard the Liben Plain for people and larks. Downloaded from http://www.birdlife.org on 01/02/2023