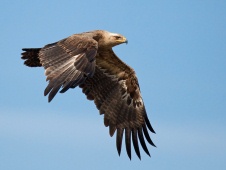 Through a UNDP/GEF funded project, BirdLife is working to conserve soaring birds during their migration along the Rift Valley/Red Sea flyway. The project’s aim is to mainstream conservation within key sectors that potentially have a considerable impact on migrating soaring birds, namely agriculture, energy, hunting, tourism and waste management. 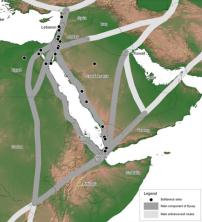 Higher trophic level species, such as large predators, often perform a key role in shaping natural ecosystems. An example is the soaring birds which provide important ecological services, particularly in agricultural landscapes where they control pest populations, such as rodents and locusts, and dispose of carrion. In total, 37 species of soaring birds, predominantly raptors, but also storks, ibises and pelicans, migrate through the Rift Valley/Red Sea flyway in one of nature’s greatest spectacles. It is the second most important flyway in the world, with over 1.5 million soaring birds migrating between their breeding grounds in Eurasia and their wintering areas in Africa each year.

Studies have shown that soaring birds can spend over a quarter of the year on migration. Recently, a satellite-tracked Steppe Eagle Aquila nipalensis flew 9,543 km from Botswana to Kazakhstan over the course of eight weeks (Meyburg et al. 2012). The average daily movement of a number of tracked eagles was 177 km (Meyburg et al. 2012).

Soaring birds utilise columns of rising air—known as thermals—in order to travel great distances whilst expending little energy. Their reliance on thermals, however, requires that they avoid large bodies of water. Consequently, large numbers of soaring birds concentrate at land crossings into Africa. These ‘bottleneck’ sites can host tens of thousands of birds during periods of migration. Undertaking such dramatic journeys can push birds to the limit of their endurance and exposes them to a myriad of different threats.

Eleven BirdLife Partners are working together on a UNDP/GEF funded Migrating Soaring Birds (MSB) project to tackle threats to soaring birds. These partners are from countries which experience huge migration movements as birds pass from Central Europe and Asia through Syria, Lebanon, Jordan, and Palestine, and then cross the Gulf of Suez, through the Nile Valley, the west coast of the Red Sea (Egypt, Sudan, Eritrea, Ethiopia and Djibouti), and a large migration following the east coast of the Red Sea (Saudi Arabia and Yemen), before crossing to Africa at the Strait of Bab al-Mandeb.

Whilst being relatively well conserved in their wintering and breeding grounds, soaring birds receive practically no conservation attention during their migration. Activities within the flyway have the potential to negatively impact avifauna from three continents, and thus their protection and cross-border cooperation whilst migrating is crucial for global conservation.

The MSB project aims to mainstream the conservation of soaring birds within five crucial sectors to ensure the conservation of the flyway is of upmost concern within development practices in the region. One of these sectors is agriculture, which can influence land use over wide areas of the flyway, and management practices, such as the use of pesticides, can have significant impacts on soaring birds.

Another important sector which is being targeted is energy, given that the diversification of energy resources is a significant and growing pressure. Whilst renewable energy development is crucial to the region’s growth and to combating climate change, without careful planning, large-scale deployment of renewable energy can lead to unintended environmental impacts (Voigt et al. 2012, Drewitt and Langston 2006). The effects of wind turbines on birds are well documented, with impacts ranging from collision, disturbance displacement, barrier effects and habitat loss (Drewitt and Langston 2006), with the impacts of collision being particularly evident along migratory routes (Hüppop  et al. 2006). Careful planning is therefore crucial; the scale of energy development is huge, with over five million kilometres of transmission lines planned globally between 2010 and 2015. The Rift Valley/Red Sea region provides some of the best wind resources in the world.

Policymakers, planning authorities, investors and developers are increasingly being urged to ensure that renewable energy development does not have unacceptable consequences on birds and nature, and to this end, BirdLife International has developed a web tool that can be used to provide infrastructure developers and planning authorities access to information on the distribution of soaring birds along the Red Sea flyway (BirdLife 2015). BirdLife International has also joined forces with the secretariats of intergovernmental conventions (CMS, AEWA) to determine the potential impacts of renewable energy on migratory species, and to produce a set of guidelines on how these impacts can be avoided or mitigated, with this policy being reviewed for consideration under Scientific Council (COP 11) (Van der Winden et al. 2014).

The third sector is hunting, as illegal hunting of soaring birds is another significant problem in some countries along the flyway, notably Lebanon, Syria and Jordan. The fourth is tourism which can create land use pressures, yet may also offer potential to promote and celebrate the wonder of bird migration to visiting tourists. The final is waste management which, whilst providing food for migrating birds, is also a source of poisoning.

The MSB project is developing strategic partnerships to ensure that soaring bird conservation is integrated into the strategies and activities of the target sector stakeholders. It is mainstreaming best practice guidance for agriculture, renewable energy, waste management and working with hunting councils to manage and advocate laws to protect soaring birds and develop sustainable hunting practices. A sensitivity map showing the known movements of soaring bird in the region has been developed to aid decision-makers, especially in the design and placement of future wind energy developments.

Part of this case study is taken from ‘The Messengers: What birds tell us about threats from climate change and solutions for nature and people’. To download the report in full click here.