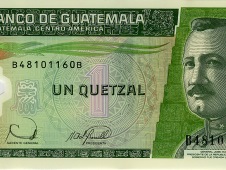 BirdLife has estimated that preventing the extinction of all known threatened species and improving their status would require an annual investment of US$4 billion. A further US$76 billion per year is needed for effectively protecting and managing all terrestrial sites of global conservation significance. These sums are insignificant in comparison with both the size of the global economy and the total value of ecosystem services delivered by nature each year.

How the annual investment (US$80 billion) needed to safeguard nature compares with other figures (all figures annual and in billions). * There is debate regarding the total economic value of ecosystem services—this figure is derived from the median estimate in Costanza et al. (1997), inflated for today’s prices. 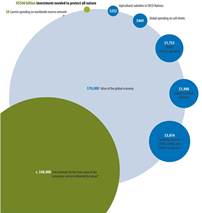 In October 2010, Parties to the Convention on Biological Diversity (CBD)—comprising nearly all the world’s governments—agreed ambitious targets for tackling the biodiversity crisis, to be met by 2020. Known as the Aichi Biodiversity Targets, these included commitments to halt extinctions and safeguard all important sites for nature. Understanding the financial costs of achieving these goals is vital if governments are to effectively implement their biodiversity policies.

Building on data for birds, a study led by scientists from the BirdLife Secretariat and the RSPB (BirdLife in the UK), calculated the annual investment needed to effectively meet two of the key Aichi Biodiversity Targets—namely pledges to prevent extinctions and to protect and manage sites of particular importance for biodiversity (McCarthy et al. 2012).

The study surveyed 236 experts in bird conservation to ascertain the financial investment needed to improve the conservation status of 211 highly threatened species. These costs were extrapolated to all threatened bird species and led to an estimate that an annual investment of roughly US$1 billion is needed to prevent human-driven bird extinction and improve the IUCN Red List status of all threatened bird species. Using data on how the resources needed to conserve birds compares to that required for other taxa, the authors then calculated that the annual cost of improving the status of all known globally threatened animal and plant species and preventing their extinction is between US$3.41–4.76 billion.

Using data on the management costs of safeguarding Important Bird and Biodiversity Areas (IBAs), as well as estimates of land-purchase costs globally, the authors estimated the cost of protecting and managing all terrestrial sites of global conservation significance at approximately US$76 billion per year.

Put simply, an annual investment of roughly US$80 billion is needed to safeguard nature adequately and meet internationally agreed targets on species and site conservation. Although this figure is substantial, and will require a considerable increase in the amount spent globally on biodiversity conservation, it is also clearly affordable when compared to the overall value of the global economy or the value of ecosystem services provided by nature. One estimate of the value of such services is US$22–US$74 trillion (Costanza et al. 1997—inflated for today’s prices).

BirdLife community news article - The cost of conservation: US$80 billion a year needed to save nature

Key message: We can afford to conserve global biodiversity if we want to
Case studies