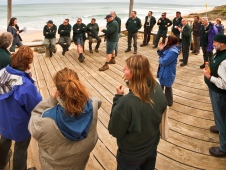 Beach-nesting birds are extremely vulnerable to human disturbance. Birds Australia’s award-winning Beach Nesting Birds project has recruited local communities to improve the breeding success of the Near Threatened Hooded Plover Thinornis rubricollis. “Friends of the Hooded Plover” groups have been set-up all along the Victorian coast, bringing together a large network of coastal residents, land managers and beach-goers to help safeguard this charismatic species.

Endemic to Australia, Hooded Plover Thinornis rubricollis are an excellent indicator of healthy beaches and a flagship for coastal conservation. Beach-nesting birds, such as Hooded Plover, lay their eggs directly on the sand and are consequently extremely vulnerable to human disturbance. In response, Birds Australia has formed the Beach Nesting Birds (BNB) project to promote coexistence between beach users and nesting Birds.

Before the project was set up, annual surveys in Victoria showed that young birds only accounted for a small proportion of the population, suggesting that the greatest threat to this species was low breeding success. Unfortunately, the species’ breeding season coincides with the peak in the summer holiday season, when human presence on beaches is at its highest. Continued poor breeding success could mean the loss of this species in eastern Australia.

Birds Australia knew that the beach-nesting birds would stand no hope if recovery efforts depended on a handful of professionals. Instead, they worked to set up an integrated and broad scale initiative which would include all coastal residents, land managers and beach-goers. Birds Australia helped establish “Friends of the Hooded Plover” regional groups along the Victorian coast, at Far West Victoria, Mornington Peninsula, Apollo Bay, Anglesea, Breamlea, Bellarine Peninsula, Bass Coast, Venus Bay, Port Fairy, Warrnambool, Cape Paterson, Rosebud, St Andrews and Sorrento. The BNB project delivered workshops to many of these groups on finding, monitoring and protecting nests. Nest site management activities include targeting beach users in an education and awareness campaign, physically fencing and signing nest sites, developing signage for beach access points, fencing dune systems, controlling sea spurge, and using nest cameras to identify nest predators to provide advice for predator control. Among the BNB project’s achievements are the coordination and completion of the 2010 biennial count, with more coverage than in any other year. Results showed that the ‘hoodie’ population in Victoria is up from 400 in 2008 to nearly 450 birds. The 2009/2010 season produced 60 fledged chicks, higher than any other season, showing that the project is working.

The Friends of the Hooded Plover groups will continue beyond the life of the project, to ensure the birds have a secure future. The groups are becoming self-sufficient, seeking their own grants, coming up with new ideas for community education, and tackling broader coastal conservation issues.