Around the world volunteers underpin much of BirdLife's work 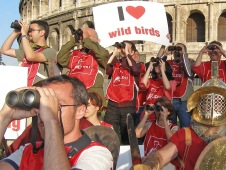 Volunteers make an enormous contribution to the BirdLife Partnership. Whether monitoring illegal hunting activities, aiding in the recovery of threatened species or simply donating an hour of their time to observe the birds in their back garden, this large and growing army of committed citizens is at the heart of current conservation efforts.

Volunteers are often the life-blood of conservation organisations and, across the BirdLife Partnership, underpin a huge amount of the work undertaken. The RSPB (BirdLife in the UK), for example, has over 13,000 volunteers, with at least nine volunteers for every paid member of staff, whilst Forest & Bird (BirdLife in New Zealand) calculate that their network of volunteers contribute 864,000 hours each year towards protecting New Zealand’s wildlife. When the BP oil spill devastated the Gulf of Mexico in 2010, more than 13,000 people signed up to volunteer with BirdLife’s US Partner, the Audubon Society. The enormous benefits that volunteers provide to conservation organisations are clear; however, there are also significant rewards for those who volunteer, as well as for the wider society. Increasingly, the role that volunteering plays in improving health and happiness and building community cohesion is being recognised (Borgonovi 2008, O’Brien et al. 2010).

Across the BirdLife Partnership volunteers are involved in a diverse array of activities, from ‘hands on’ site management—such as habitat restoration and the clearance of invasive species—to fundraising and wildlife research.

In Malta, volunteers are a crucial part of efforts to halt the illegal hunting of migratory birds. Each year, BirdLife Malta runs two conservation camps—Spring Watch Camp in April and Raptor Camp in September. Volunteers come from numerous countries including the UK, Germany, Italy, France, Spain, Denmark and Finland to help monitor bird migration and act as a deterrent to illegal hunting by reporting illegal activities to the police.

In Australia, volunteers are at the heart of efforts to save some of the country’s most imperilled bird species. Established in 1996, the Threatened Bird Network (TBN) of Birds Australia (BirdLife in Australia) is a community based programme that brings together expert scientists with community members to develop and implement species recovery plans. At any one time, TBN has over 5,000 registered volunteers assisting in the recovery of threatened species such as Australian Painted Snipe Rostratula australis, Carnaby's Black-Cockatoo Calyptorhynchus latirostris and Regent Honeyeater Xanthomyza phrygia.

In North America, tens of thousands of volunteers take part in Audubon’s Christmas Bird Count (CBC). Now in its 111th year, this annual event is the longest running Citizen Science survey in the world. In 2010, a record-breaking 60,753 participants submitted records for nearly 56 million birds—an invaluable dataset that allows scientists to understand how birds and the environment are faring and track emerging threats such as climate change. In the UK, over 600,000 people took part in the RSPB’s 2011 Big Garden Birdwatch survey, which encourages members of the public to count the number of birds that visit their gardens over the course of an hour.

Recommended Citation:
BirdLife International (2011) Around the world volunteers underpin much of BirdLife's work. Downloaded from http://www.birdlife.org on 29/01/2023