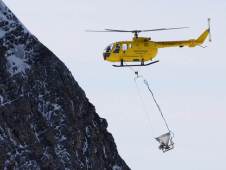 Over 100 million seabirds inhabit South Georgia, a 3,500 km2 island in the South Atlantic Ocean. For over 200 years the island’s birds have suffered predation by introduced Norway rats and mice, and over the last 100 years, habitat degradation from introduced reindeer. A step-wise rat eradication programme using bait pellets, the largest of its kind to be attempted worldwide, is being carried out by the South Georgia Heritage Trust. Phase One (in March 2011) successfully cleared rats from one part (10%) of the island; Phase Two (2013) and three (2015) targeted the remaining regions known to be impacted by rodents. Reindeer were also removed in 2013 and 2014 by a South Georgia Government initiative.

The sub-Antarctic island of South Georgia (3,528km2; 54°–55°S, 36°–38°W) emerges precipitously to 2,900m from the cold, productive waters of the South Atlantic Ocean. Despite its mainly barren, mountainous environment, it is home to exceptional biodiversity.  Most of its fauna and flora are confined to the coastal fringe where tussac grass Poa flabellata predominates (Clarke et al. 2012). The remaining 50% of the island surface is under permanent ice and snow, and there are numerous glaciers dissecting the island (Poncet et al. 2011). South Georgia is one of the most important marine wildlife colonies in the world, with over 30 million breeding pairs (i.e. >100 million individuals) of birds (SGHT 2009), comprising 29 species (Clarke et al. 2012). Antarctic Prion Pachyptila desolata (LC) alone makes up 22 million breeding pairs, more than 85% of the species’ global population (Clarke et al. 2012).

This remarkable South Georgia ecosystem is threatened by the presence of introduced Norway rats Rattus norvegicus (there are no native mammals). They are thought to have been introduced to the island around 200 years ago, by visiting whaling and sealing vessels. The rats predate the eggs and young of smaller seabirds such as storm-petrels, prions, and terns that nest on the island, as well as the eggs and young of the endemic South Georgia Pipit Anthus antarcticus, and the endemic South Georgia race of the Yellow-billed Pintail Anas g. georgica.The impact on pipits is so severe that they are now confined exclusively to the offshore rat-free islands and a small rat-free zone on the main island (and the species is assessed as Near Threatened on the IUCN Red List). The island is also home to introduced mice Mus domesticus, reindeer Rangifer tarandus and invasive plant species, which are collectively degrading the South Georgia ecosystem.

The scale of the project designed to eradicate the rats is unprecedented. The South Georgia Habitat Restoration Project organized and funded by the South Georgia Heritage Trust (SGHT), aims to clear rats from a 750km2 treatment area (more than six times that of Campbell Island, New Zealand, the largest successful rat eradication to-date; McClelland 2011). Bait pellets containing Brodifacoum are dropped by helicopter across infested areas. The risk of non-target consumption is deemed minimal as most species are marine predators and the poisoned rats tend to become photophobic, thereby moving underground prior to death. Furthermore, Brodicafoum is not water soluble and will break down over time, thereby avoiding environmental pollution.

Phase One of the project (in March 2011) successfully cleared the Thatcher, Greene and Mercer Peninsulas (SGHT 2010). The rats in these and other areas of the island are contained by glaciers (Black et al. 2012). These natural barriers to rat dispersal allow South Georgia to be divided into discrete eradication zones, which are cleared sequentially over a number of seasons. Without the glacial features, this size of operation would be unfeasible. However, these glaciers are in retreat, and in time these barriers to rat dispersal will disappear. The successful completion of this eradication project is therefore a matter of some urgency.

Phase Two (2013) baited 57,600 ha, and phase three (2015) baited (36,380 ha), targeting all of the remaining areas known to be impacted by rats. The introduced mouse population was also addressed as part of this project, as they are also known to predate seabird eggs and offspring (Wanless et al. 2007). Reindeer, which graze on the native tussac grass, leading to localized erosion (Christie 2010), have been eradicated independently. The rodent eradication project will be defined as a success if no rats are detected for a two year period after the final phase of the eradication schedule (SGHT 2009). Finally, both during and after project completion, strict biosecurity measures will apply to all human visits to South Georgia and its adjacent islands in order to prevent another incursion of rodents (GSGSSI 2012).

Recommended Citation:
BirdLife International (2015) An ambitious eradication project is currently underway on the Antarctic island of South Georgia. Downloaded from http://www.birdlife.org on 04/02/2023