A State Park of 10,000 hectares has been established to protect Restinga Antwren 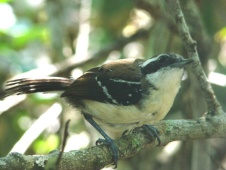 Supported by the British Birdwatching Fair and Species Champion Urs Peter Stäuble, SAVE Brasil (BirdLife in Brazil) and Species Guardian Pingo d’Água are working together to create a 10,000 hectares state park which will safeguard the entire range of the globally threatened Restinga Antwren.

Restinga Antwren Formicivora littoralis has a highly restricted range around Cabo Frio in Rio de Janeiro state, Brazil, where is occurs in coastal scrub vegetation. Pingo D’água, the BirdLife Species Guardian, working with SAVE Brasil (BirdLife in Brazil), has campaigned for the protection of the species’ habitat. In April 2011, the Governor of Rio de Janeiro State signed documents to create the state park of Costa do Sol, protecting 10,000 hectares and encompassing almost all of the Restinga Antwren’s distribution. The population is still estimated at fewer than 1,000 individuals, but the new protection and a better understanding of the species status led to BirdLife downlisting its status on the IUCN Red List from Critically Endangered to Endangered in 2012.

New research has yielded important new information regarding the home range size, foraging behaviour and population size. Introduced marmosets which had spread into the area and were threatening the bird’s nesting success are being removed under a project led by the State University of Rio de Janeiro. Representatives of local state and municipal bodies are now collaborating on marmoset management in the Restinga Antwren’s range.

An education and awareness-raising campaign has generated considerable media coverage, while thousands of people have seen an exhibition and banners conveying messages about the unique biodiversity of the restinga habitat.

Recommended Citation:
BirdLife International (2013) A State Park of 10,000 hectares has been established to protect Restinga Antwren . Downloaded from http://www.birdlife.org on 01/02/2023