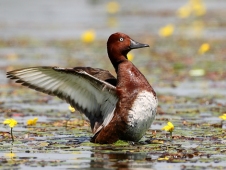 As part of the UNEP/GEF Wings Over Wetlands (WOW) project, the Hungarian Ornithological and Nature Conservation Society (BirdLife in Hungary) has helped introduce a ‘nature friendly’ fish-farming strategy at the commercially managed Biharugra Fishponds. The initiative has been a huge success both economically and environmentally and will hopefully become a model for effective collaboration between nature conservationists and the fish-farming industry throughout the region.

The Biharugra Fishponds, within the Körös-Maros National Park in eastern Hungary, are an important breeding site and staging ground for migratory waterbirds. Managed as a commercial fish-farm, they host over 100,000 waterbirds annually, including globally threatened species such as Pygmy Cormorant Phalacrocorax pygmeus, Lesser White-fronted Goose Anser erythropus and Ferruginous Duck Aythya nyroca. The fishponds are considered ‘Wetlands of International Importance’ (a Ramsar site) and form part of the Kis-Sárrét Important Bird Area (IBA).

Unfortunately, the economic viability of fish-farming in the region is under threat with many fishponds at serious risk of abandonment. The fishponds require active management to maintain the appropriate conditions for waterbirds and the cessation of fish-farming could have devastating consequences. The Biharugra Fishponds were therefore chosen as one of eleven demonstration projects for the UNEP/GEF ‘Wings over Wetlands’ (WOW) initiative—a partnership of international conservation organisations and national governments that aims to conserve migratory waterbirds along the African–Eurasian Flyway. Hungarian Ornithological and Nature Conservation Society (MME; BirdLife in Hungary), worked closely with the fish-farm operators to devise a commercially viable yet ‘nature friendly’ management strategy. This new system—which includes improved feeding techniques that not only reduce nutrient pollution but also lower costs—has already delivered both economic and environmental benefits since its introduction in 2008. The company that runs the ponds has gone from making a loss to breaking even in less than a year, and it expects to move into profit soon. In addition, abandoned ponds have been restored, and nesting islands created. Bird populations have responded positively; for example, both breeding and passage numbers of Ferruginous Duck have increased, with 3,300 individuals present in September 2009, which is the highest number every recorded in the region. The ecotourism potential of the site has also been developed. A nature trail has been opened with observation towers and a range of interpretative signs, and accommodation has been built for visiting birdwatchers and students.

Traditionally, there has been considerable conflict between conservation practitioners and the fish-farming industry in Central and Eastern Europe. Mainly this has arisen due to fish predation by Pygmy and Great Cormorant Phalacrocorax carbo, but there is also resentment at the management constraints imposed by conservation authorities. A key element of the Biharugra project is that it has been used to demonstrate the benefits of ‘nature friendly’ fish-farming throughout the region. Workshops, attended by fish-farmers and other stakeholders from across Hungary and Romania, have helped disseminate information on how to make fish-farming profitable within the context of nature conservation and habitat improvement.

Fish farming systems are critical to the conservation of waterbirds in Central and Eastern Europe. It is hoped that this project will become a model for effective collaboration between the private sector and nature conservationists that will trigger similar initiatives elsewhere in the region. The project team has already begun to explore ways to build on the many successes of the initiative.